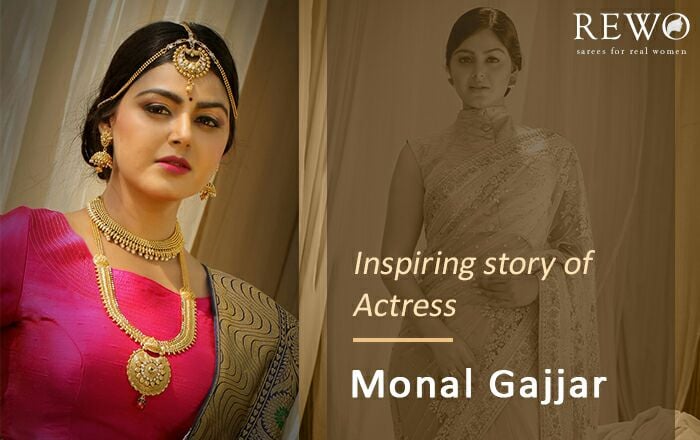 When the Going Gets Tough, the Tough Get Going – Inspiring Story of May #ReWo Star Monal Gajjar…

“Our greatest glory is not in never falling, but in rising every time we fall.”
–  By Confucius

A 16 year old girl, jolted out of her world of security and comfort, at a tender age and a crucial time – one who must have inwardly uttered ‘Never say die’, when her class XII preparations were thwarted unfortunately by a painful tragedy. A determined, dedicated winner, who beat odds to work successfully in an industry whose language she doesn’t speak – Or achieve a career triumph at an age, when all she should have been doing was studying, laughing and living her life of innocence and sweetness. Innocence – the bubble she was forced to exit – when life catapulted her overnight – to a whirlpool of responsibility.

Monal Gajjar, beautiful film actress from Gujarat’s heartland – Ahmedabad, was never prepared to start her career with a bank – full-time, before life threw a hurtling googly at her, in form of her father’s unexpected death. In her class XII, Monal took on the responsibility of supporting her family’s failing financial situation. An unrelenting crusade against life’s impediments led her through shifty troughs and crests at a break-neck speed. From working for films in alien languages, where she spent nights cramming her scripts – to working tirelessly to bag a career offer with ING Vysya bank, much against the minimum-age norms – this resilient teenager just did not stop. And well – the rest is history! 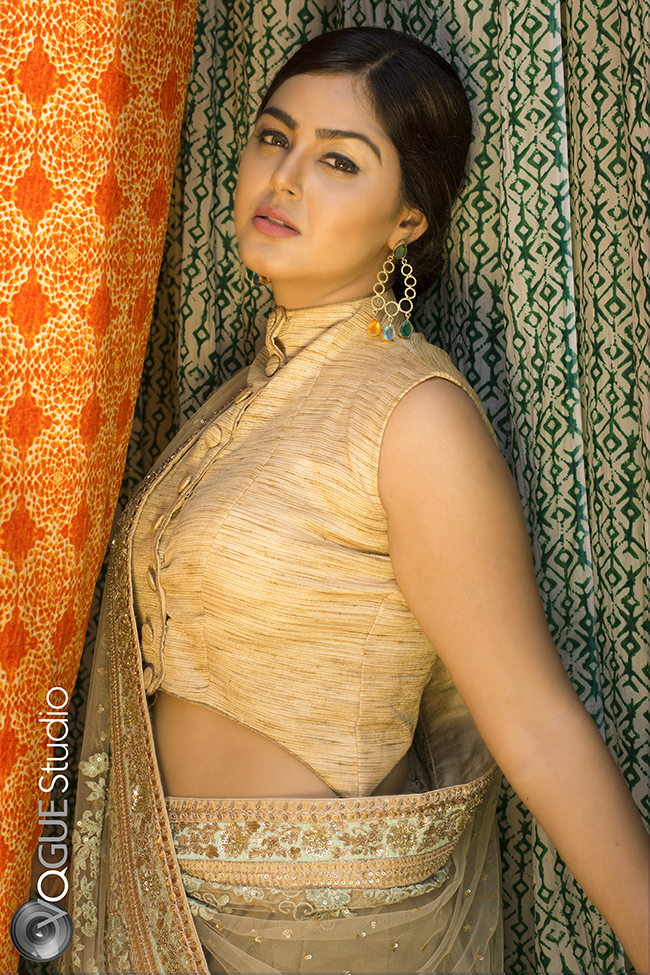 In this gorgeous single hued, speckled with stardust, embellished net saree by Asopalav, Monal looks like a Real Life Goddess that she is! Monal and the photography agency Vogue Studio worked hard for this photo-shoot – and the gorgeous results are for you to see. To keep the flavor of the shoot in line with the subtle personality of this beautiful actress and her inspiring journey, agency Vogue Studio and its chief photographer Mittal Shah kept the lighting and backdrops au natural! Monal’s ‘Humble Beginnings lead to Great Glory’ story is an inspiring tale – that must be told with fitting expression. And, Saree.com sets out do it with finesse.

Instrumental in drawing us to her – making her our stunning #ReWo Star – the exalting journey of this beautiful-inside-out Real Woman is an inspiration – especially and critically to the ones, who would rather take a step as drastic and cataclysmal as suicide or crime, instead of taking on the life’s challenges!

Project ReWo – Sarees for Real Women has been started by Asopalav’s online entity Saree.com. The portal aims to touch the lives women, bringing them heart-warming tales of strength, fortitude and faith – via some inspiring Saree ambassadors – women, who have made it , through sheer will, hard work and sincerity.

Monal is our lovely #ReWo Real Woman this month – who’s relationship with life and Sarees is worth celebrating. Someone from whom we all can learn cardinal lessons, despite her young age, Monal loves Sarees and Indian outfits, as she feels utterly at ease in them. Her natural grace and girl-next-door image, established through her career as an actress in the South Indian film industry and in the contemporary Gujarati cinema, gels excellently with the subtle designer saree she chose for the shoot. 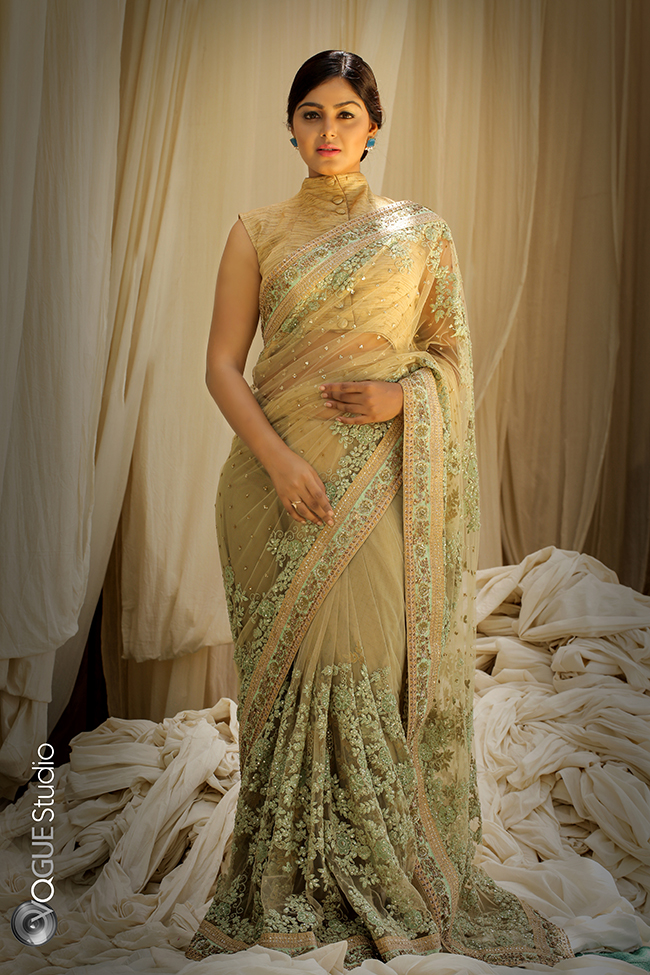 Here is a girl who wore a Churidar Suit to her first audition (at the age of 16) – as she competed – armed with little else except her supreme self-confidence – against umpteen hot-pants clad pretty-young-things. This damsel, whose guileless smile won hearts and awards – making her win Ms. Gujarat Smile title, despite such a daunting competition – is our lovely Real Woman this month.

Shuttling back and forth between the glam world and her corporate day jobs – as financial strains kept her tied to fixed salaries – Monal worked relentlessly, grooming her personality and communication skills to the tee. Even before she was 19, she had entered a partnership in a consultancy business, and was renowned as an insurance and career consultant in her city.

Although she considers herself tremendously lucky for coming across opportunities and good people at the right times, Monal ruefully admits that she had to pay the price – by the way of health setbacks – for her frenetic work schedules. She gained weight – given her erratic eating patterns and endless stresses – which became a hurdle for her. 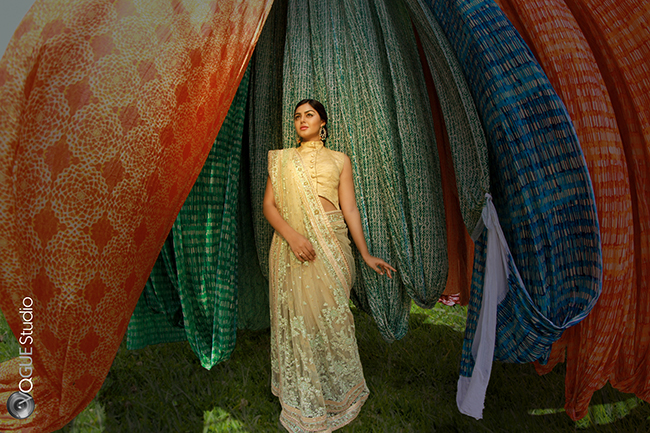 People had always complimented her for her striking face and heart-warming smile. Confident that she was, embracing her shortcomings, resolving to overcome them was ‘in’ her! She started her tryst with Yoga. Armed with this confidence and modeling assignments, a few years down the line, she participated in the Mirchi Queen Bee Pageant – that made her a direct entrant to the coveted Femina Ms. India Contest.

Modeling had been on agenda, but only as a pedestal for forwarding her acting career. But, our ReWo Real Life heroine’s voyage was certainly not made of only smooth paths. Unfazed by rejection from Ahmedabad’s top photographers – though being utterly positive in taking their constructive criticism to heart, Monal worked her way through a series of ups and downs. Till today, she doesn’t forget to express gratitude for the hugely useful guidance given to her by ace photog Arjun Tanwar. Soon, she bagged her first print assignment – with the local brand National Handloom. 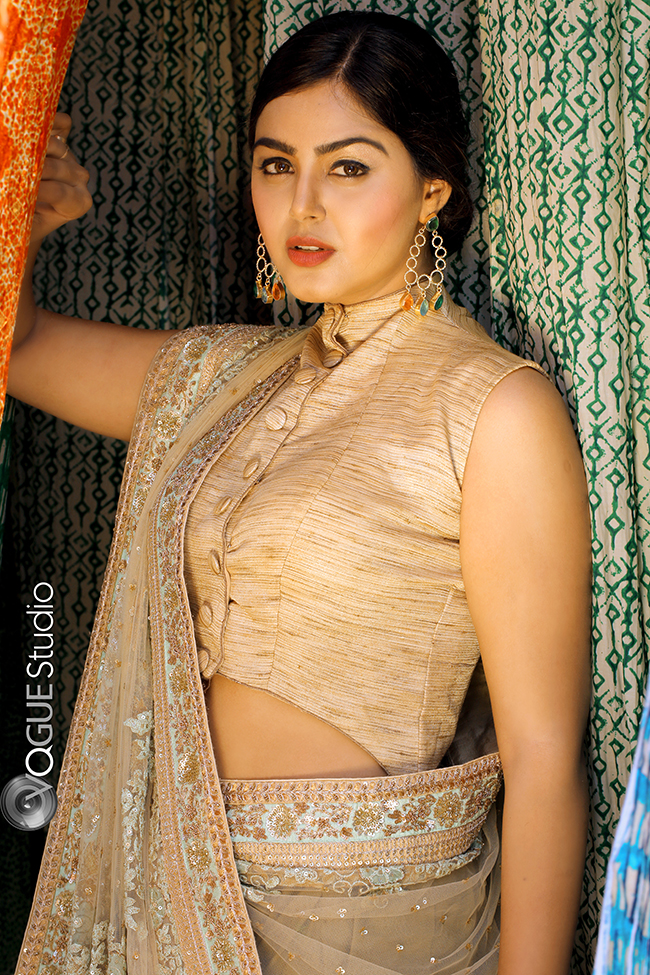 Ahmedabad to Surat’s bustling Sari world was a natural progression for this confident diva. She started her ‘real’ modeling career with Sari Catalogues – and here lies another divine connection between Monal and the magnificent Six Yards. 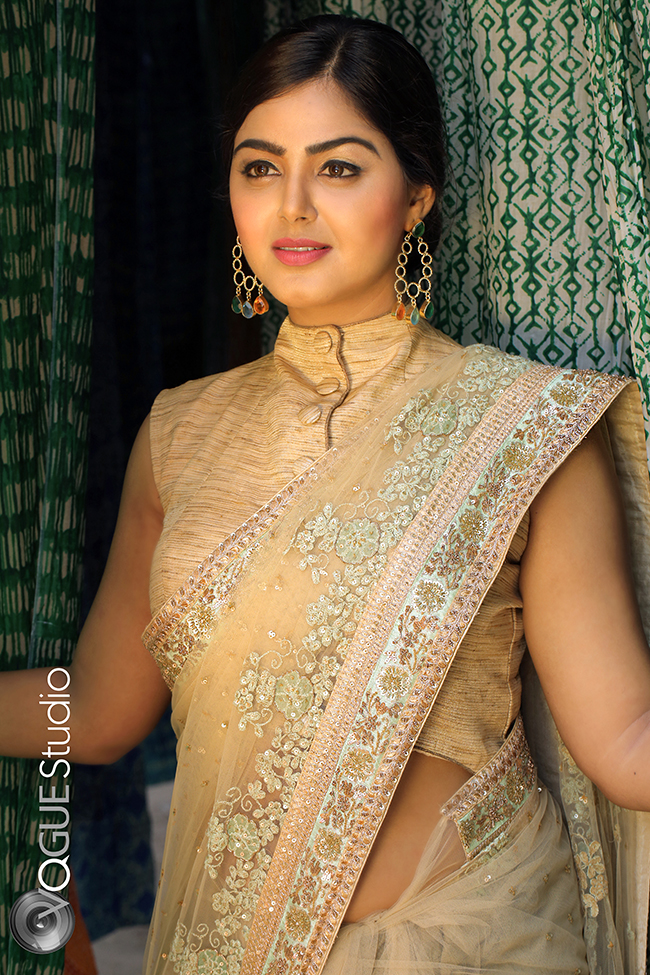 Femina Miss India’s national platform milestone gave Monal a chance to work in the South Indian films. Here was a girl who had signed 5 films, even before her first movie had released! Not to rest on her laurels, Monal kept working hard, as she swamped her way through the films in all 4 South Indian languages. Ask her how she managed the languages, and she tips back her head, laughing – “I did all I could to get the lip syncing right. It is extremely important – and people did take notice of my rugged devotion to understand the expressions behind the words (in languages, I did not know). Assistant directors and mediators who spoke Hindi and English helped a lot…a lot! I will always be grateful to them.”

The girl – who was slowly transforming to an inimitably marvelous woman – did not take a vacation for years, working round the clock, living the dream, she had envisioned, sketched and designed herself. 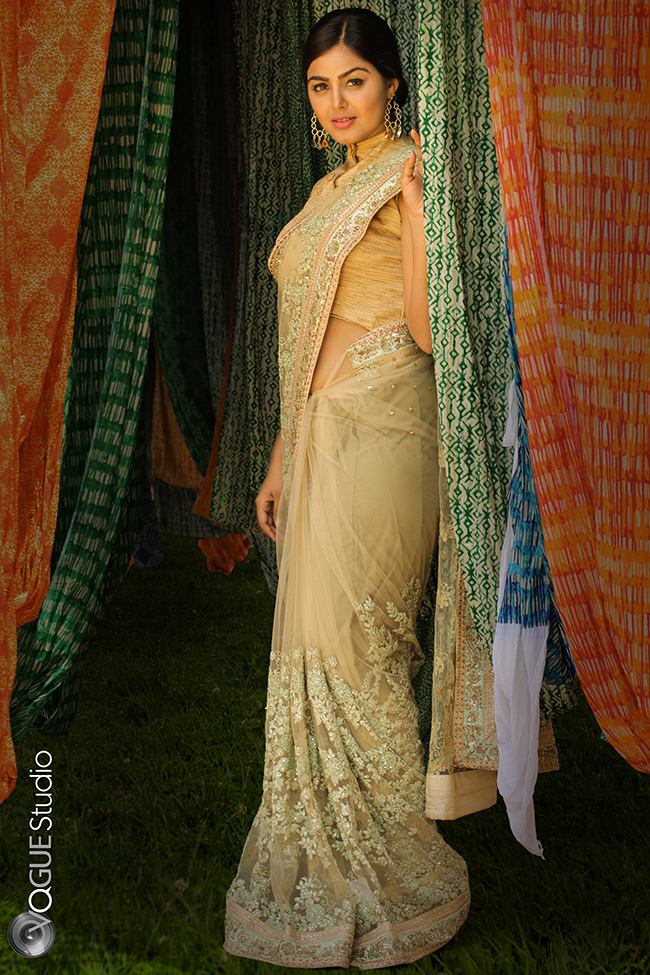 That was never a choice – but a raging hurt, a heartbreak kept her away from the limelight for almost a year (in 2015). She battled emotional doldrums – only to rise like a Phoenix – as she got set to conquer the home turf. She turned to Yoga again, where once again she buoyed back to life. Her Yoga Guru, Shri Kalpesh Pujara, who had been a guide to her all the while, helped her. He suggested Gujarati cinema to Monal.

On life’s low roll, Monal decided to test waters in her home territory – Gujarati Cinema – that was, fortunately, being drenched in a happy new-age wave, by the time she made her foray. And boy, did she succeed! Again bagging 5 films (seems like her lucky number) in Gujarati, Monal is back to the grind.

She plans to make herself fitter, more competitive – and even more articulate – and a bit diplomatic (which she admits is a necessity in this politics-laden, cut-throat world) – so as to make her way ahead smoother – and shinier. And that – it will be – for we know the grit and gorgeousness our ReWo Star is built of.

Just like her constant companion Saree, this ReWo Star is going to win the test of time – and life. We wish her all the best ahead.

Powerful and Unshakeable - Shweta Tiwari Is ‘Here To Stay’!

11 Easy Ways to Up Your Saree Style

Get These Sleeve Styles For A Trendy Wardrobe Makeover

These Stunning Wedding Reception Outfits Are A Must Have

Go Win O’ Woman – Be There for Your Girlfriends Sakhi!

Win the Style Game this Festive and Navratri Season 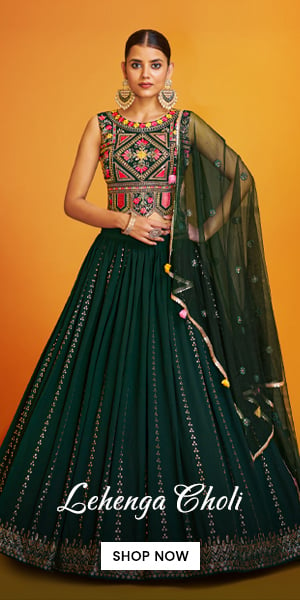 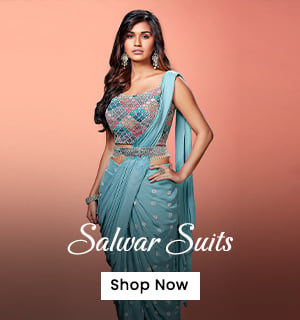