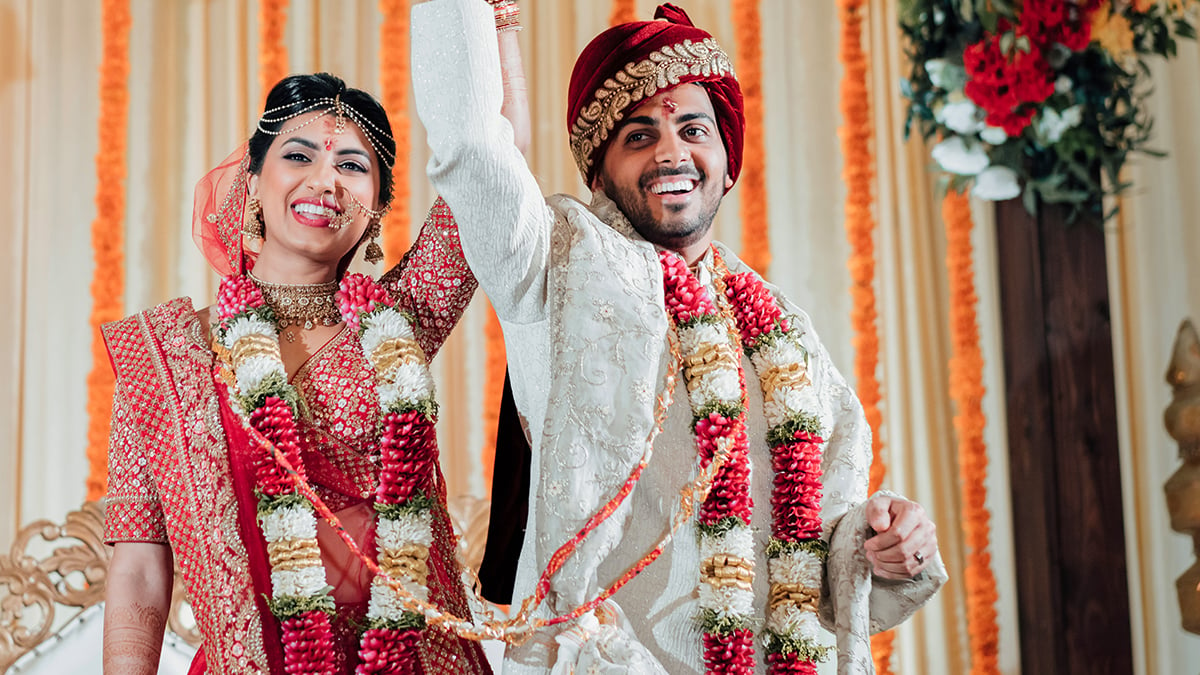 How cute does it sound when two close friends tune into the frequency of love. Having known each other for years, coming together as a couple takes on a different phase! It is a journey that begins from a foundation of comfort and compassion, progressing towards the bond of eternity.

Saree.com bride Anjali tells us about her cute, or must we say, an extraordinary story that had its stages of Bollywood-style romance. Residents of the USA- Anjali Gandhi & Arpit Dave solemnized their wedding on 7th August 2021, at the Sheraton Parsippany Hotel.

While we loved the authentic Indian wedding setup, we can’t help appreciating how Deepesh Agarwal (Weddings by Shooting Stars) captured the essence of the ceremony so exceptionally well.

Make-up artist Ami Patel showed her creative skills by accenting Anjali’s pretty face with the right shades of pink and red. Among such inspirational details, the one thing that stands out for this wedding is- Anjali and Arpit’s extraordinary love story.

So, was it love-at-first-sight? No- says Anjali, who shared a strong bond of friendship with Arpit.

From making tea in their hostel dorm to confiding their discreet wishes, Anjali and Arpit created the best memories as friends. The affection grew with time- eventually, Arpit, smitten by Anjali’s affectionate nature and gorgeous smile, realized he was in love. But when things so smoothly, a twist in the tale sounds interesting- our cute bride- turned out to be a coy girl next door! So, here began the chase!

Anjali’s eyes still twinkle at the memory of finally agreeing to Arpit’s desire for a relationship. Kudos to Arpit, who kept his patience for months! And well, it brings us to believe once again that when it’s meant to happen, it will. From friendship to spending every day together, love found them before they realized it.

It’s a blessing to have someone who accepts you as you are- whom you can have around while being yourself. And that is what led the happy-go-lucky Anjali into a world of dreams, visualizing a future with her man.

As she says, “He brings out the best in me. Life with him is happy and carefree! It feels like it was always meant to be.”

To be honest, I had my eyes wide open, with a big smile and rising heartbeat as I got to know about Anjali’s Bollywood scene proposal story! Arpit’s long wait for the perfect proposal moment paid off with a Yes but before we go further, let’s rewind to the romantic details of that precious moment.

After six years of dating, Arpit decided to pop The Question- with a surprise! Weekend after weekend, he tried to convince Anjali for a date at the Central Park in New York, a place that held treasured memories from their journey. So while Anjali, oblivious of Arpit’s intentions, kept postponing the visit, his patience threshold gave way to a new plan!

Finally, just a weekend before the couple were going to fly to India for Arpit’s sister’s wedding, Arpit, like a romantic hero, walked up to Anjali’s doorstep in New Jersey and asked her to come along for a peaceful walk to a nearby park. Anjali narrates the moment like a vivid vision-

“It was cold outside, and I kept my hands warm by putting them in his coat pocket. It was the first time I thought, “wow, wouldn’t it be nice if he had a ring hiding in here”. By complete coincidence, we walked by a couple holding hands in front of a lake. I told Arpit, “I think that guy is going to propose! But man, isn’t it so awkward when people hold hands and face each other like that?”. Arpit was probably sweating at this point because little did I know- he had the ring box hiding in his other coat pocket. Arpit brought his camera so he could capture the moment but I kept using it to take photos of random flowers and plants along the walk, almost completely draining the battery! Finally, at that same spot in front of the lake, Arpit suggested we set up the camera and take a nice photo together. At this point, I was STARVING and ready to go eat lunch, but I agreed with some convincing. Arpit set up the camera- I remember the sound of the shutter clicking- and- all of a sudden- he was down on one knee. It was the surprise of a lifetime – and we now have a time-lapse capturing the whole thing! We spent our first days engaged in India with showers of flowers and family surrounding us, attending wedding celebrations and imagining our own.”

Indian weddings can be elaborate- but the fun, the merriment- makes it worth the efforts! With deep roots, Anjali & Arpit had their heart set on having a traditional ceremony. Creating an Indian wedding ambiance in New Jersey was a challenge that the couple delightfully took.

Wrapped in red, orange, and golden tones, the ceremonies carried an ethnic feel. With a yellow dress-code Pithi ceremony under a tree shade and a Sankheda swing with Bandhani decorations at the Sangeet- the wedding was all about treasured Indian elements- including the staple Marigold!

With such predilection to cultures- what other outfit could we expect Anjali to choose- but the evergreen red lehenga! Arpit’s ideal wedding outfit was all about traditions blended with comfort.

The pandemic threw a curveball to the couple’s shopping plans in India- leaving them with only digital modes to procure their dream wedding outfits. Thanks to technology and high-quality video calls, virtual shopping is a feasible trend globally.

Here’s how Anjali describes her video shopping experience with Asopalav-

“Thanks to Asopalav, the video shopping sessions were a creative way for us to find our dream outfits. We stayed up until many midnights in the US to do our wedding shopping on a video call with the team at Asopalav, and, took a leap of faith without ever having seen our outfits in person – and we were so happy! My bridal lehenga was custom-made. We were also connected with the Asopalav team throughout the process, which put our minds at ease.”

Creating Memories of a Lifetime

Their wedding looks being a surprise- the couple went through a double Antarpat- and we’re all smiles thinking about the first accidental unveiling- now that’s some coincidence!

A wedding is not just a celebration. It is a treasured new phase that gets an extra dose of being extra-special with the presence of family and friends. The laughs, dance moves, late nights, food, little things count big-time.

The best way to start a life together is to have the people you love by your side!

Get Stylishly Colorful Dresses for Holi and Dhuleti Bash

Aditi Expresses Her Experience For Our Video Shopping Services

Celebrate This Festive Season In Style With These Trendy Salwar Suits

The Best Mehendi Outfits To Have In Your Wedding Collection

What to wear to an Indian Wedding as a Guest? 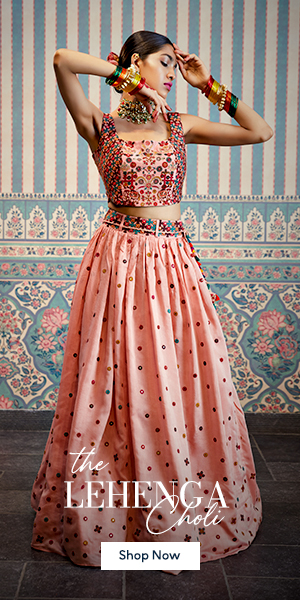 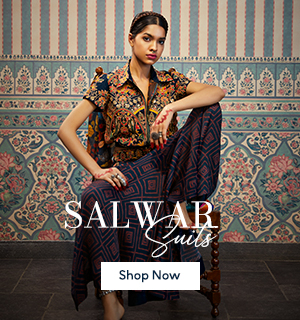